Last May, an acquaintance or as I like to say 'some random chick' from bible study posted on Facebook that she had 2 job offers to which I posted a congratulatory post like a gazillion other folks. She was to graduate soon and every woman in the Metropolitan Baptist Church (Day 35) Women's Bible Study was excited because over the last year we had all prayed for her to finish her dissertation.

So, last July when I was heading to vacation bible study, I casually said to my Roomdog (Day 2) 'Hey, if that chick takes that job here, I'm going to tell her she can stay with me for a few until she gets on her feet.' My Roomdog replies 'Hmm, she seems cool.'

That was the extent of our conversation. So, lo and behold we run into this random chick at vacation bible school. Coincidence? Not! We didn't know she was back in town and had taken the job here. We hugged her, gave her fist bumps and I told her if she needed a place to stay, she could call me.

Later, I thought, I should probably give her a call. You know how folks say stuff like 'we should do lunch' but you know good and well they don't mean it. So, I sent her a text telling her that I was serious and if she needed a place to stay ... I had an extra room. The next time we actually spoke was 2 weeks later, when she moved in and I was giving her the tour. She had never even been to my house and we had coordinated the entire exchange via text. LOL.  I laugh because I wasn't even here when she moved in, I left her some keys and the alarm code.

That entire exchange left me confused. It seemed suspect and crazy considering that with a few text messages, I now had a roomie. I'm not a 'willy-nilly' type of chick. C'mon this thing sounded bizarre for real. I'm also very particular about who I let in my home or ride in my car; you must have good energy. But, I simply couldn't wrap my mind around it. And while I didn't understand it, I was excited that she moved in - like she was a new toy  'Hey, did you see that roomie I picked up at Costco? Girl, they had a coupon. But mine has an accent and sings.'

So I did what any self-respecting woman would do when there's a mystery, I played detective. I was on the case and I needed cold hard facts, some evidence eluding to why in the world would I invite 'some random chick' from bible study to my home -- to live. I searched through all of my emails and texts trying to solve the mystery. It didn't make any sense and I was puzzled.

There weren't very many email exchanges - most were light, 'What's going on? Work. See you on Sunday. Girl, that usher in the bow tie was easy on the eye.' Yada-yada, there was nothing of interest. I did see her a handful of time outside of church and while we shared our stories, it still didn't quite add up. But, there was one email that caught my attention from the previous year. I had sent an email to 'my homegirls' because I needed a big favor. Not a big deal, right? Except that this 'random chick' was on this email and I could barely believe it. This was the evidence, the 'smoking gun, 'the deep connection, this case sucked. REALLY? 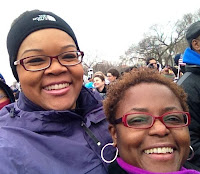 Looking back I now know this crazy, outlandish, insane idea was for a specific purpose. We've already agreed that there are no coincidences. This was simply a faith walk which is why I couldn't uncover any evidence or facts. There were none. You see, I believe that this crazy idea was planted in my heart. Just like it was planted in hers to pack her bags, clear out her storage unit and move in here, sight unseen.

This 'random chick' is still my roomie and we're just a few months shy of a year. What's even more astounding is that this 'random chick' has blessed me in such a way I can barely capture it with words. She encouraged me to finish reading a book that challenged me spiritually, uncovering some uncomfortable places. This 'random chick' is the culprit behind me journaling, wrote me a lovely prayer, casually suggested after Ash Wednesday service that I start this blog and introduced me to boot camp.

I know that since then I'm a better christian, woman, friend, sista-in-love, trying-to-make-it-incredible, blogger ;-) and her being here absolutely has something to do with that. And of all the things I admire about her, what I admire most is how she is unapologetic, unreasonably, unconventionally, unabashedly in love with the Lord. Some mornings, I can hear her in her room getting it in, playing church, praying, praising the Lord, singing His praises, humming and I can feel the energy in this place move. 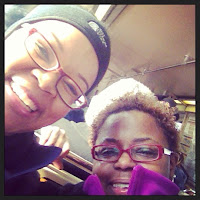 And while we mostly get along ;-) let's be real, here ... what's that verse Proverbs 27:17 'As iron sharpens iron, so one person sharpens another'  ... I know that we are better, stronger, sharper and more ourselves from this experience.

So on this Day 23 of 40 days of gratefulness, I'm grateful for this 'random chick' from bible study, my LG, Dr. Sophoria Westmoreland. #beblessed #40daysofgratefulness
Posted by Unknown at 7:22 AM