Sequestration. Does anyone know what that means? I actually had to do some research as I wasn't familiar with the term. It sort of sounded like sequester, you know as in 'the jury was sequestered' but let me tell you what I've discovered. According to Wikipedia, sequester or sequestration has several 'legal' definitions. Some of them are as follows:

1. the seizure of property for creditors or the state
2. the isolation of a jury
3. the U.S. legal procedure in which automatic spending cuts are triggered.

According to CMM, the sequestration is pretty much a gigantic  across-the-board spending cut for the government, with the cuts split 50-50 between both domestic and defense spending. It was initially to be addressed in late 2011 but that didn't occur, so naturally it was tabled until now. Which means the federal government could very well be smacked with a massive spending cut which we could feel the effects of in the next few weeks. It's not clear to me who the culprit is but things could change drastically overnight. I'm in the Baltimore/DC Corridor and folks are going crazy. The news is reporting around the clock what could happen, I'm receiving ALERT text messages on my cell. I mean, the parks could close, there could be no afternoon school programs, homeless shelters could close, there could be more pay cuts and layoffs (these have started as folks prepare), furloughs are possible, I mean it sounds like all hell is breaking loose. I mean, I'm not expecting folks to be looting in the streets but on the other hand, I never dreamed of 'tent city ' or the 'occupy movement' either.

Both my roomie (Day 23) and I receive our income from the government, so while we are not around here pulling out our hair, we did prepare. We turned off the premium cable channels - hey, every little bit helps ;-) And by the way, we got 2 apple TVs. Hey, we each needed one for our own room. What if she wants to look at a movie and I want to listen to music. By the way, I hope Steve Jobs forgives me for not adding that to the best money I ever spent (Day 12) list because it's the best! Sorry, oh yeah, back to sequestration.

I hope and pray Congress remembers they are sworn in and at the end of their pen strokes are people lives. So, now that the Sequestration is coming, what's a Sista supposed to do. You know, where I'm going with this right. Don't know what to do - Get Grateful. That sounds like a lovely idea for t-shirts ;-)

Worry? I will not! Have a pity party? Nope, I'll turn on that apple TV. Slash my wrists? Pull-lease, I 'choose gratefuleness.' Remember, as Christians, we are never hopeless even in the face of disaster, disease and yes, even sequestration. We were never promised that things would be easy but we rest assured in knowing He, who has our back. So, I will not bemoan this stupid sequestration. I will steal back it's sting. When someone ask me years later, 'Girl, what were you doing when the sequestration hit?'

'Me, I was toasting with 'sequestration strawberries' and champagne.'


'Screw you, Sequestration. I choose gratefulness.' 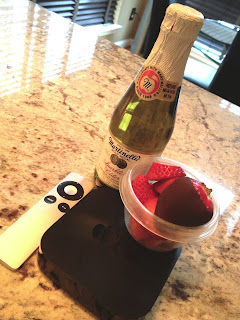 Yup, you heard me, I'm going to take this thing in stride - like any good 3rd grader (Day 9) would do. Just last week a friend sent me a verse, Hebrews 13:6 to keep me encouraged. The message translation says "Don’t be obsessed with getting more material things. Be relaxed with what you have."

So on Day 14 of 40 days of gratefulness, I am grateful for being relaxed with what I have.  #beblessed #40daysofgratefulness
Posted by Unknown at 7:58 AM