Let's do a small recap from Day 29. My roomie (Day 23) tricked me into going hiking. It would be fun, she said. And it was fun at first, until we go lost. We were no longer on the trail and it had been several minutes since we last saw anyone else. I had a gnawing feeling that we probably wouldn't make it back to the car until sundown. I was permeating fear with every second and believed that a fox had picked up my scent. Now that fear had settled in, I wondered how was I going to overcome this fear? I had to play my cards right. Fear is contagious and my roomie, the shenaningator seems like the type to lose it, I would be strong for us both.

Before I could move past the fear, I was going to have to accept it. We were good and lost. Hmm, that didn't make me feel any better the first time I said it. By the second, third and fourth time, I was feeling better. I attributed my ability to move past fear by the real or imagined fox that was keeping a close watch on us both. The vultures circling up ahead didn't help. Maybe that was the fox's last kill. Woo-sa, woo-sa.

To add insult to injury, my roomie was trying to strong talk me, 'the car is this way she points.' Man, she sure is smart. That's right my being comfortable with the uncomfortable would help me overcome this paralyzing fear I was experiencing. Worse case scenario, we could have always gone back the way we had come. Rats, where was that pesky fox? REALLY? She is the worse and was going to get a strong, side-eye the moment I got back to the car, safely. She really is a piece of work. Who was I kidding, I was never going to be able to go back the way we came. I mean, my shoulders were burning and my right leg was starting to hurt, I began to limp slightly.

Our provisions were low and the fox was closing in. Then it hit me. How to overcome this fear? I was chock full of quips about fear, 'Run to the roar.' 'Do it afraid.' 'Put on your big girl panties.' All inspiring in their own right but the only real way to overcome fear and move forward, is faith. Ahh, I knew a little something about faith ;-) In fact, I had started a faith walk with this shenanigator almost a year ago. But, could she really be trusted after bringing me out here.

Now, it didn't take long to muster up a little faith as my roomie, the 'random chick', shenanigator had saw fit to musically document our adventure with none other than Fred Hammond. Aah, first a moment to get over the desire to throttle her neck. Rats, the fox was back. Hey, focus here, faith, right? I had to 'lean into it.' I didn't know what to do but I let faith kick in, which to me looks like me letting go.

And just like that my fear had subsided and faith had rushed in. Well almost, because it had been another 9 minutes and we still hadn't seen another person and yes, I was still counting. It did concern me that she had now picked up a a fairly large stick, did she too see that fox? I decided to keep it to myself less we both panic but I hadn't seen that fox in awhile.


You allowed your love to shower me.
When I deserve it least.
Your grace and mercy, my shelter from the storm.
And through the night till light appears.
You cause me to sleep peacefully.
And bring rest upon my weary heart.

That's Thoughts of Love from his Love Unstoppable album. And like magic, my fear had transformed into faith and our adventure was back on once again. The song had a salsa feel, I take a few moments to salsa. 1 , 2, 3 ...  cha, cha, cha. Yup, I still have my moves from Zumba. And just like that, the fun triumphed fear.

Once again I could appreciate our surroundings. Despite the day being overcast, it was still beautiful just looking around. With fear gone, my focus re-directed and faith restored, I could see that this day was purposeful. I had experienced fear, faith and fun all within a few hours and it was great. And once we saw people again, I would feel even better. Aah, I saw something familiar, the trail sign where we started.


It appeared that we had wandered off the beaten path into the wilderness where we roamed but not without faith. Follow me here, we wandered the wilderness, faced fear and found faith along the way. Oh, if I could escape my Episcopal up-bringing, a praise dance would be on. I was lost but now I was found. What? We were delivered. Restoration! Imagine soulful humming here because my roomie was still musically documenting our journey. Hey, when did she throw down her large stick? That was a good sign and it seems that pesky fox had moved on.

We were starting to see familiar surroundings and while our faith had been restored, our bodies were fading fast. We passed a group of kids who were disappointed, as the first trail was closed. My roomie told them  another trail was open just a mile down. I smiled - they had no idea what was in store for them. God bless 'em and I, too hoped they had faith. 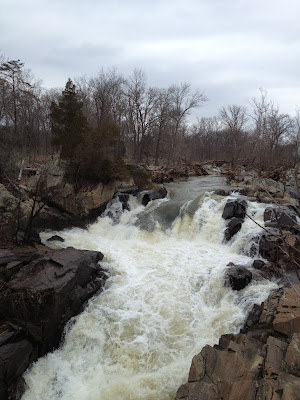 So on this Day 30 of 40 days of gratefulness, I'm grateful for faith. #beblessed #40daysofgratefulness
Posted by Unknown at 7:28 AM