I spent the better part of yesterday, hiking. This was my first time hiking, I believe. The basic difference between walking around outdoors in a park and hiking is that hiking has rocks. And when I say, rocks - that's exactly what I mean. Not the gravel-like, river rocks you might come across in your front yard. I'm talking about rocks that are too heavy to lift, too big too see around, too big too climb over and too steep to understand why in the world one would agree to come again. Rocks or better yet, boulders whose surface is so smooth and slick you wonder if ones bones would shatter like glass if one fell down. Rocks that were so off the beaten path that one had no cell phone service, which implied one had no rescue. Right, you're starting to get the picture.

I had been 'sufficiently set-up,' bamboozled, hood-winked, 'taken to the hoop,' and straight took by my roomie (Day 23). Oh yeah, she tells me that the trail is fine and that she had brought her parents here previously. I thought she loved her parents and cared for their safety but perhaps I was mistaken, for this was plain ol' shenanigans. This Billy Goat Trail was not for the faint of heart. I couldn't believe folks were even out there with their animals and kids. Both PETA and child protective services would be called the moment my cell phone regained service.

We started out by taking a few pictures of the park, this was pre-hike. We wore bright colors because we like how we feel when we wear them. I called my Roomdog (Day 2) to let her know where we were just in case we needed to be rescued. Initially, hiking was  great. I could tell the day would be full of adventure, intrigue and shenanigans. The trail started out easy and light. We walked along quietly just listening to the river rushing down through the canal. It was easy to take in all the sights and sounds, I exhaled because it feel good. A little exercise in God's natural playground was nice. But as we walked, the trail became more dense, the pathway more rocky. It was no longer wide enough to allow more than one person to pass. The elevation rose too quickly and now the rocks had jagged, scary, razor-sharp edges. Oh, my.

But my roomie assured me that this wasn't bad. Hmm, this wasn't bad, she said. Getting a hang nail isn't bad, a splinter in your finger, that's not bad. Walking along the trail that was some 50 feet high and not even 2 feet wide with only the grand rapids or a cliff on either side, that qualifies for a little more than 'not bad.' I wondered about soil erosion. But we kept moving. It would be fine I thought to myself, we were prepared, I had my gloves, my favorite scarf and provisions. Our adventure continued and just as I was starting to feel comfortable and safe, the trail dead ended at a group of boulders as these no longer met the definition of rocks. And this is where this fun adventure turned to one of fear.

Now, the first rule of survival, is that one must absolutely not appear afraid. But I was in full-blown terror mode and it seeped out in waves. What was I thinking? #$@@%#$ A flurry of curse words almost came across my lips but I only said them to myself. Yup, we're all a work in progress. 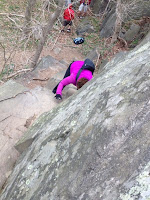 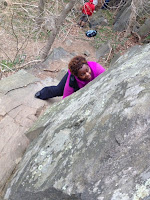 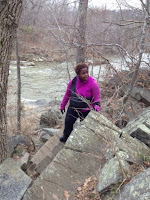 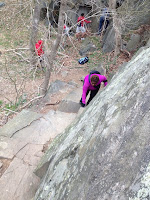 The next 30-40 minutes I can barely remember because I was sufficiently petrified. And my roomie decides she wants to add a soundtrack to my terrifying ordeal. That's right, she's now musically documenting my own personal fear session with Fred Hammond. Hmm, I wonder if I will suffer this paralyzing fear every time I hear the line, I will dance like David danced? I'll keep you posted. To make matters worse, we received some very interesting looks when folks walked by with us 'getting it in' with Fred Hammond - oh, forgot to mention, my praising-the-Lord-at-all-times, roomie was singing along in her outside voice. 'Dayum, there goes our rescue squad.'

And just when I think I can't take anymore, we get lost. We couldn't find the trail markers but no worries on that front either because my roomie who's increasingly becoming some 'random chick' in charge of my own personal nightmare, points that the car is back that way. Really, I know it's back that way somewhere but where are we? 'Grr, iron sharpens iron, right?' No problem, my cell service had returned, I'll look at the map. Rats, I guess google maps hadn't been down these trails, lately. We hadn't seen another person in 7 minutes and yes, I was counting. Since both safety and comfortableness were things of the past, fun had now manifested in to full blown fear. For some reason, 'fight' or 'flight' came to mind. Well, I couldn't 'fight' this praising-the-Lord-at-all-times 'random chick' less I'll never get back and she is freakishly strong. And I would have loved to 'flee' but the car was to the left, upstream as the 'random chick' so eloquently demonstrated by pointing.

Really!! Why didn't I heed the warning sign, KNOW THE DANGERS OF THE POTOMAC RIVER? Have I learned nothing in this life? I was growing increasingly uncomfortable. Woo-sa, woo-sa ... get a hold of yourself, chick! What have I learned? I've learned that we must become comfortable with the uncomfortable to get life's most important lessons. This life isn't always easy and it's riddled with fear, regret and uncertainty but I'm saved, I don't subscribe to being simply paralyzed with fear. No analysis paralysis for me. I've learned to my face my fears head on because on the other side of all fear is a lesson that once I get it, I'll have it forever. And this simple premise applies to everything.

If I need to discuss an issue, you can best believe it's going to go down. It may not be easy but it is necessary. Life has taught me to be comfortable with the uncomfortable. I know that on the other side of an uncomfortable conversation is a relationship strengthened by trust. A relationship that withstands obstacles because with each issue we overcome, we move to another level of understanding. Now, how does one learn to overcome fear you might ask?

So on this Day 29 of 40 days of gratefulness, I am grateful for being comfortable with the uncomfortable. #beblessed #40daysofgratefulness
Posted by Unknown at 8:34 AM